On Saturday 16th November, after the sunset brought on a crispy chill in the air, 350 guests arrived at The Nine Kings Suite at The Royal Lancaster London, W2, to attend the Oinoussian Ball 2019 to celebrate the 77th Anniversary of Oinoussai Benevolent Fund. 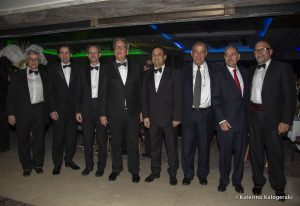 Dressed suitably in black tie, both English and Greeks mixed effortlessly together during the reception where drinks were offered and caricature artists followed people around the room drawing humorous sketches of the guests.

At around 8pm, the Master of Ceremonies announced dinner was served. Suddenly, the large wall and doors began to disappear into the ceiling and the ballroom slowly became visible. This drew gasps of surprise and delight from all watching. The ballroom was beautifully lit and the tables were adorned with exotic orchid centrepieces along with individual gifts of Greek delicacies. 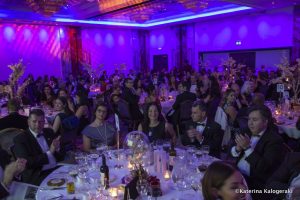 The OBF President, John M. Hadjipateras, welcomed everyone in his heartfelt speech. He spoke of the fund’s achievements over the past year and emphasised the difficulties on the island not only from the continuing plight of the immigrants who risk their lives to reach the welcoming Oinoussian shores but also of the almost daily provocation from the Turkish air force who fly menacingly low over the island creating anxiety and discomfort for the inhabitants. He praised the initiative of a group of islanders who constructed a giant Greek flag made out of stones, painted white and blue, covering 1.5 acres, visible from Chios and of course to any passing airplane, that sends a clear message. This has officially been recognised as the country’s biggest flag. He concluded by thanking everyone in the room for their continued beneficence and support and also welcomed the younger London Oinoussians who had organised three full tables. 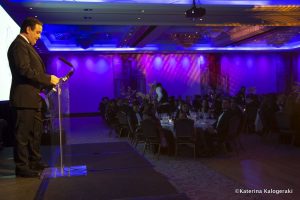 The dinner consisted of a starter of smoked salmon and prawn fish cake, with a main course of grilled noisette of lamb and for dessert, a flaming crème brulee that arrived at the tables, literally flaming, to the gasps of the diners.

His Excellency the Ambassador of Greece, Mr Caramitsos-Tsiras, was invited to say a few words and he spoke briefly but passionately, thanking OBF for its longevity, its patriotism and its continuing achievements in social, educational and cultural matters. He stated his admiration for the fund and praised the tireless efforts of the committee. 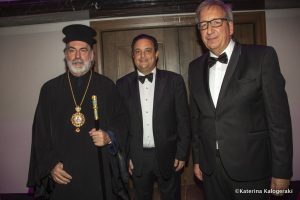 This was followed by the recently enthroned Archbishop of Thyateira and Great Britain, Nikitas, who took to the stage and began by apologising for his belated entrance due to previous engagements and then went on to speak movingly and eloquently about the significance of the fund’s traditions of paying homage to its founders and how it is a beacon of light in today’s current uncertain social environment. He encouraged the fund to strive to achieve even greater heights in the future. He concluded by forgiving the guests were they not to attend church on Sunday after enjoying the evening!

Both respective speeches were enthusiastically received by the audience with warm and generous applause.

Now it was time for the dancing to begin. The resident and incomparable DJ Avgoustinos Galiassos invited everyone to the floor with an eclectic mix of international and Greek music. The guests danced away for over two hours without any intermission. Meanwhile, in the reception area, there was an open bar, the two caricature artists and a photo booth that attracted long queues. 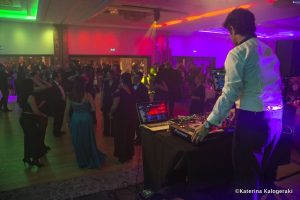 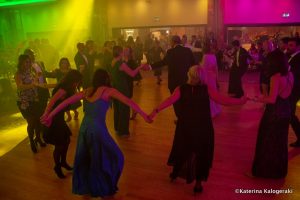 As usual, the OBF’s unique masticha shot girls made their appearance, in gold lame dresses and feathered headdresses and wandered around the rooms offering shots to all the guests who were happy to receive this complimentary thirst quencher. 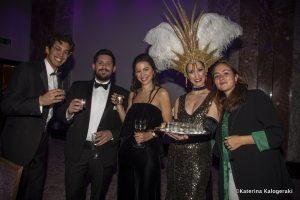 At 11.45pm, the music stopped and it was time for the much anticipated raffle draw. The Vice-President, George T. Lemos conducted the draw with his customary dry wit and he was ably assisted by the events chairwoman, Maria P. Hadjipateras. There was much merriment as people shouted out their desire to win the impressive list of prizes. Eventually, there were sixteen very satisfied winners. The prizes were diverse and included hotel stays in Greece, a winter/summer cruise, jewellery, a spa day and much more.

The music resumed after the raffle draw and the dance floor was full again. Everyone was enjoying themselves and few people had left. Such was the demand for dancing that the hotel was persuaded to keep the music going for an extra half an hour much to the cheers and delight of all in the room. 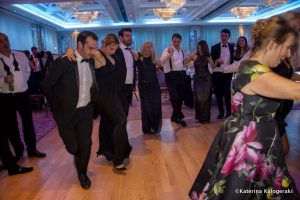 Eventually, at around 2am, most of the guests had departed carrying with them their souvenir programmes, the delicacies of the mastihopittes and newly formed memories of another wonderful evening.

Congratulations to the OBF President and the executive committee and to the Ladies events committee members for organising another memorable event with style and panache and for creating an atmosphere that was bursting with conviviality and liveliness. We applaud the longevity and history of this fund that consistently manages to bring together family, friends and business associates for this triumphant and congenial annual occasion.